hey everybody out there. thanx for your support. we just wanna let you know about whats happening right now.

Pre production for the new lp are done. we basically practise the songs now and we reached the stage of writing lyrics because finally the song writing process is pretty much over. we just gonna add some guitars and write lyrics.

after a 2 year break we will return on stage with fresh songs and a new concept for the live show. the new songs as well as the live shows will be different then the stuff we did before. clean vocals? maybe .

well, dont expect it to be, just another grindcore record. like it or not. we just do want anyways.

we still have some merch though.

lots of merch. want some??? and records too. 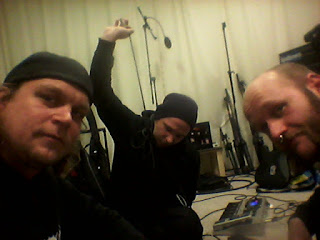 just an idea for a new song....not very tight and some little mistakes ,but hopefully enough to keep everyone starving for a new who´s my saviour record.......next year guys.....!
Eingestellt von who´s my saviour um 17:01 Keine Kommentare:

we recorded a new song

just to keep you hungry for a new upcoming record in 2015. of course the song will be re-recorded

but check this out and give us some feedback via our facebook site..

-Who's My Saviour / rostock - grindcore

26th of Septemer @ G.I.G., Reilstraße 122 ,Hallewe gonny play with kaapora + caca de luna + shock troopersit would be awesome not to play infront of two guys again ,and one guy is already drunk and asleep. come on halle . there must be people living in this town,https://www.facebook.com/events/808442432511177/?ref=ts&fref=ts
Eingestellt von who´s my saviour um 09:36 Keine Kommentare:

Ox - Fanzine on wall of sickness